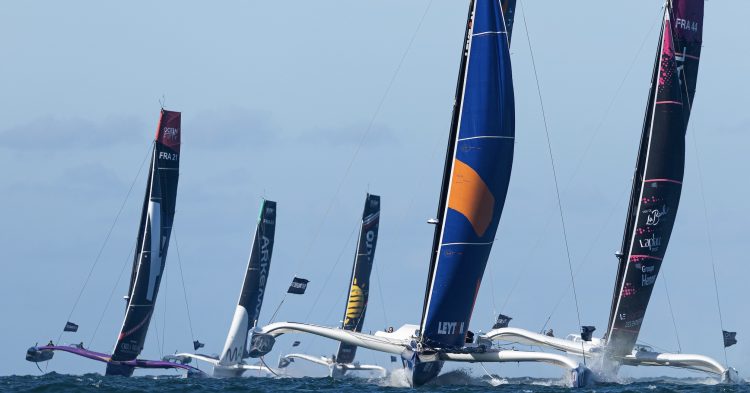 July 26 – Two women helped crew boats to podium finishes in the 2022 Pro Sailing Tour, a European regatta fought with boats that look like spaceships and fly above the water at speeds to nearly 50 mph.

Perhaps the most notable part of the women’s victories is what didn’t happen – neither was singled out for attention by the skippers and other crew.

Laurane  Mettraux and Audrey Ogereau will simply take their place in history. Their names are on the roster of the 2022 Pro Sailing Tour, its second annual event and one that covered 2,000 miles and created 400 hours of TV taken aboard the seven boats that campaigned from May into July.

Mettraux, aboard the second-place Leyton for some legs, and Ogereau, aboard the third-place Koesio for some legs, were part of an event that celebrates diversity as women continue to make inroads in an elite sport that has been the realm of men and their financial backers. A total of four women crew served in the regatta. The on-board media crew of 15 included men and women.

The women sailors earned their spots through racing careers on the water.

Mettraux is a professional sailor who joined Oman Sail to compete with a woman’s team in the Sail Arabia Tour. She pays the bills by working in the winter as a substitute schoolteacher and as a cooking teacher, according to her biography on a team website.

Ogereau lists her work on her LinkedIn page as a business engineer, and as a skipper for Oman Sail. In a YouTube video for the team, Ogereau says of her duties aboard ship (according to the translation): “I am a bit of the small hands that help Erwan [Skipper Erwan Le Roux], especially on navigations where we are two with dice. or even sometimes taking the helm.”

Julien Mauriat, CEO of the Pro Sailing Tour, cited diversity as one of the top three successes of the event. Mauriat said in a statement:

To put Mauriat’s outlook in perspective, it was just 37 years ago that the only job open for Tracy Edwards was as cook in the 1985-86 Whitbread Round the World Race. Not willing to take the brush-off without a response, Edwards came back in the 1989 Whitbread to lead the first all-women team to a second-place overall finish in the 33,000-mile race around the world. The feat was rendered in 2018 into a movie named after the boat, Maiden.

The boats of the 2022 Pro Sailing Tour are more like spaceships than the traditional sailboat Edwards and her crew sailed. These traditional boats of that Whitbread still have their place in the world of blue-water racing. But the future that’s arrived is the type of vessel Mettraux and Ogereau helped race along the coasts of England, France and Ireland.

The boats are square, about 50 feet in either direction, have three hulls and when they’re going fast, they rise from the water and ride on thin wings, called foils, that are the only thing to touch the water. The sailors and media crew must have terrific physical and mental skills to function in this environment.